WHEN THE VACATION IS OVER FOR GOOD

“It will be strange
Knowing at last it couldn’t go on forever,
The certain voice telling us over and over
That nothing would change,

And remembering too,
Because by then it will all be done with, the way
Things were, and how we had wasted time as though
There was nothing to do,

When, in a flash
The weather turned, and the lofty air became
Unbearably heavy, the wind strikingly dumb
And our cities like ash,

And knowing also,
What we never suspected, that it was something like summer
At its most august except that the nights were warmer
And the clouds seemed to glow,

And even then,
Because we will not have changed much, wondering what
Will become of things, and who will be left to do it
All over again,

And somehow trying,
But still unable, to know just what it was
That went so completely wrong, or why it is
We are dying.”

Sailors have an expression about the weather: they say, the weather is a great bluffer. I guess the same is true of our human society — things can look dark, then a break shows in the clouds, and all is changed, sometimes rather suddenly. It is quite obvious that the human race has made a queer mess of life on this planet. But as a people we probably harbor seeds of goodness that have lain for a long time waiting to sprout when the conditions are right. Man’s curiosity, his relentlessness, his inventiveness, his ingenuity have led him into deep trouble. We can only hope that these same traits will enable him to claw his way out.

My good friend, Peter, is in the wine business. 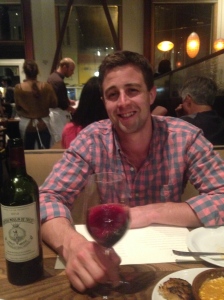 He has actually completed two harvests in Italy and knows more about wine than anyone I’ve ever come across, ever. I was recently in San Francisco, where he now lives (he used to be here in Charleston) and was able to spend a day in Sonoma/Carneros sampling wines.

Afterwards we went to dinner and he taught me a valuable tip.

What do you do when you want to remember a fantastic bottle of wine? Take a picture, of course. Well, I did this exact thing when he told me that I needed to get a picture of the back of the label as well, see below. The reason for this is the importer matters a lot. The same ‘label’ can be imported by different places and you can accidentally get a completely different wine. SO, take some advice from my friend Peter and turn your wine savvy up a notch, take a picture of the back of bottles too! 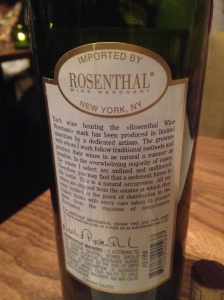 My mom loves history. Really, really loves history. Growing up, she would take us to the smallest towns’ museums if there was any kind of historical significance. This constant exposure to history, coupled with her infectious enthusiasm, gave me a love of history and feeling of inspiration when I encounter it in a tangible form.

Moving to Charleston was, in that sense, a sensory over load. Here on our tiny peninsula is where the Civil War began and the reverberations of that war are still seen everywhere in Charleston, today. There are multiple opportunities to learn about history every where you turn (even without trying).

Ft. Sumter, where the first shots of the war were fired is, however, only accessible by boat. It is a remarkable site and one that each child should visit while learning of the war in school. Many children do, in fact, come from private boarding schools to visit this site and learn first hand. The sad thing is, many of our area students have lived in the shadow of this historic site and never been able to reach it.

History education is a top priority for the Trust. Kids to the Parks is our program that facilitates school field trips to Charleston’s historic National Parks. These visits spark excitement and interest in learning. Kids to the Parks has enabled nearly 2000 visits since 2012, earning the praise of students and teachers alike.

As the acting Treasurer of the trust, this is my shameful plug to donate to our cause or just to pass the word. There are friends groups for national parks all over the country. If you don’t feel that Ft Sumter hits you personally, perhaps check out the friends group nearest you. These groups are necessary because National Parks can’t raise money themselves, so trusts/groups like ours are required to raise anything over the budgeted government funds. So if you’ve ever been moved by history in any form, large or small, here’s your opportunity to give back.

It’s about 1.5 miles from my house straight down the peninsula of Charleston to the Ashley River, where it flows into the harbor. It makes for a nice loop and as I increase time/mileage, it’s nice to run down the sea wall but today was just an out and back.

It was really windy/choppy today, but still gorgeous. 🙂

This is a fantastic lil story. Yes, it is again from Brainpickings.org and if you haven’t crossed over to the time vacuum that exploring it’s articles can be, I feel for you.

Lost Cat is a beautiful, illustrated story that all cat lovers and animal lovers alike would appreciate. I especially love the illustration of the “safe zones” around the animal’s home. 🙂

And in the spirit of cats, here’s Mr. Brownerson (he has many nick names) being a sleepy beast. 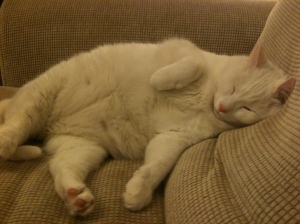 As previously mentioned I am more than excited that Jenny Lewis is coming to Charleston. I’ve seen her once before when she opened for Conor back in 2008.
At Cain’s Ballroom

I sadly never saw Rilo Kiley before they broke up. She is one of my all time favorite singer songwriters, and she deserves a listen by anyone who hasn’t treated themselves before.

And she played (past tense) a free show in 2012 in San Francisco. And I mistakenly believed it was this year, false alarm.

Trust me, do yourself a favor if you like any kind of folk-rock-country-indie-alternative-insightfullyrics-music and give her a listen. Start with her album Acid Tongue.

Most of these artists are coming to the newly revamped Charleston Music Hall. They have been working hard to get us some outstanding music and I, for one, couldn’t be more grateful. Kudos, CMH, kudos.

While I generally read non-fiction, I do like to change it up a bit. I came across this article (again on Brain Pickings!) and have been reading the fascinating book, Time Warped.

From the article: “Time perception matters because it is the experience of time that roots us in our mental reality.” 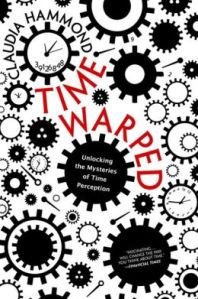 I definitely would recommend it so far and will post thoughts when done.